Can You Find All The Easter Eggs In The Twilight Zone Season 1?

There are more than a few nods to the classic Twilight Zone within the new series.
If you've been watching the reimagining of The Twilight Zone closely, you've probably noticed some things that, as a longtime fan of the series, sparked some memories.

STREAM: Full Episodes Of The Twilight Zone Exclusively On CBS All Access

Don't worry. You're not going mad. You haven't stumbled into The Twilight Zone yourself. You have, however, discovered some of the intentional callbacks laced throughout the series meant for die-hard fans to catch.

We're not going to reveal them all here, but we thought we'd offer up a few to get the wheels turning. Some are more obscure than others, but we bet you can find them all if you watch really closely. 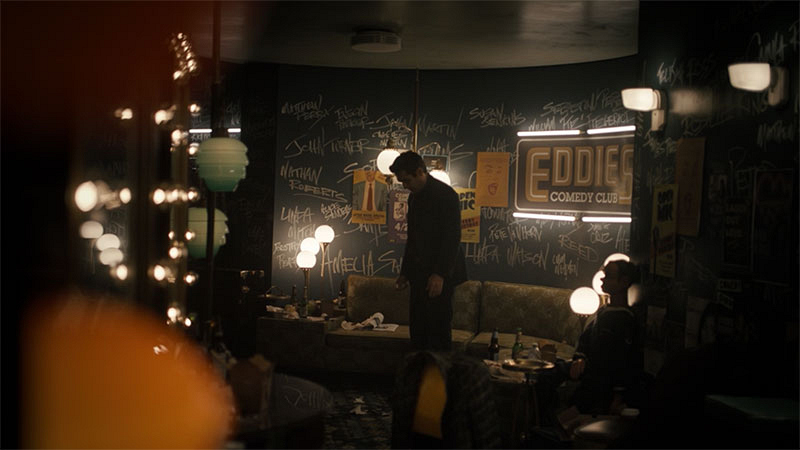 Willie The Dummy
There's probably no more fitting place for a ventriloquist dummy than a comedy club, right?

Seen sitting idly against the wall of the green room in Eddies Comedy Club (no apostrophes allowed!), Willie the Ventriloquist Dummy appears to be a permanent fixture of the venue... and The Twilight Zone.

In the 1962 Twilight Zone episode "The Dummy" (Season 3, Episode 33), Willie is a ventriloquist's dummy who gets the last laugh on his creator when he becomes the puppeteer. 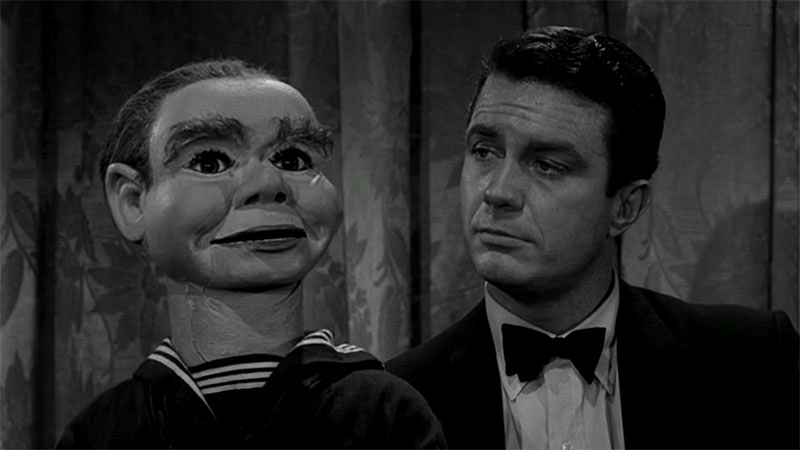 It's one of the most terrifying episodes of the original series, and impressively the original prop survived the decades since and was able to be included in the premiere episode.

He may not know it until it's too late, but Samir's (Kumail Nanjiani) self-destructive journey to fame in "The Comedian" was inevitable, considering he was living in The Twilight Zone. If only he could've recognized Willie as a harbinger of what was to come, he might have been spared his fate.

STREAM: The Classic Episode Of The Original Twilight Zone, "The Dummy" 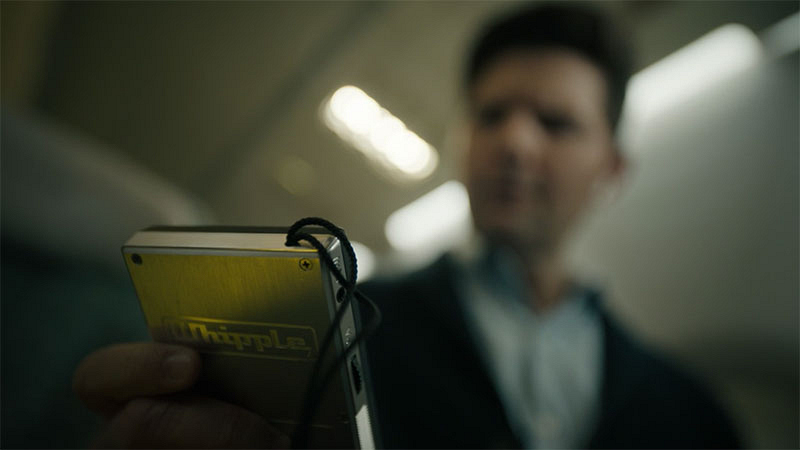 Whipple MP3 Player
Even though the episode title itself is an homage to a classic Twilight Zone episode, there are references to other episodes in addition to "Nightmare At 20,000 Feet."

One of the most pivotal secret appearances is the brand of MP3 player that Justin (Adam Scott) finds in the seat back pocket of his seat: Whipple.

In the 1964 episode of the original Twilight Zone entitled "The Brain Center At Whipple's" (Season 5, Episode 33), Mr. Whipple is the owner of a manufacturing company who decides to automate thousands of jobs by replacing workers with an advanced machine. 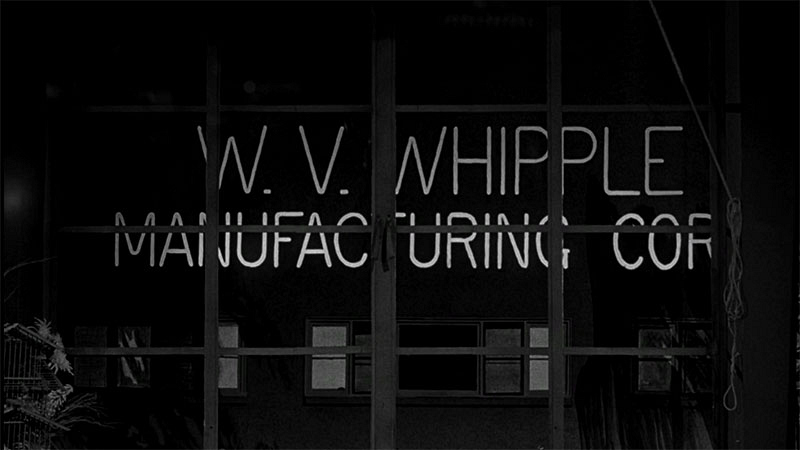 But in The Twilight Zone, any decision can tempt fate... something Mr. Whipple learns the hard way when he himself is replaced by a machine.

It's fitting then that Justin finds an MP3 player manufactured by Whipple in "Nightmare At 30,000 Feet," as the device plays a key role in Justin's own twist of fate that leads him directly into The Twilight Zone.

STREAM: The Classic Episode Of The Original Twilight Zone, "The Brain Center At Whipple's" 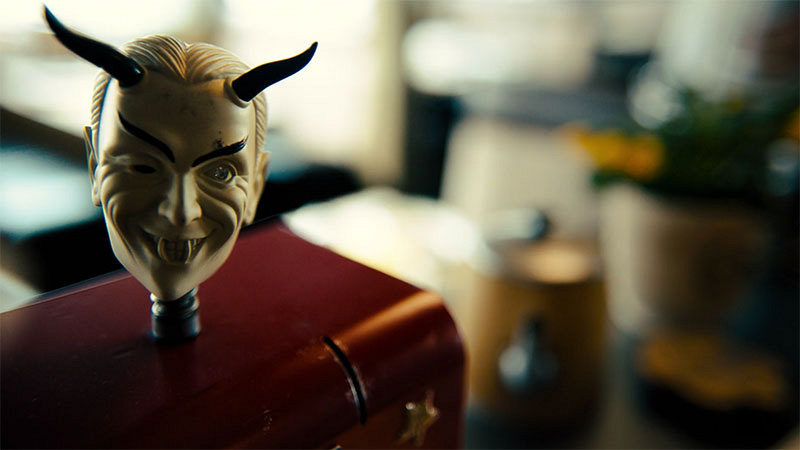 The Mystic Seer
Although it doesn't play a pivotal role in the plot of The Twilight Zone episode "Replay," an artifact from one of the classic entries of the series can be prominently seen inside the Busy Bee Diner (itself an Easter egg!) where Nina (Sanaa Lathan) and Dorian (Damson Idris) stop for a meal.

There's a mystic seer napkin dispenser inside the diner of the very same design used in the 1960 episode "Nick of Time" (Season 2, Episode 7).

In that episode, a man and his wife stop into the Busy Bee while they wait for their car to be fixed and soon become obsessed with the fortunes the mystic seer is telling.

Eventually, they come to realize that it's not the predictions that matter, but rather their obsession with them. 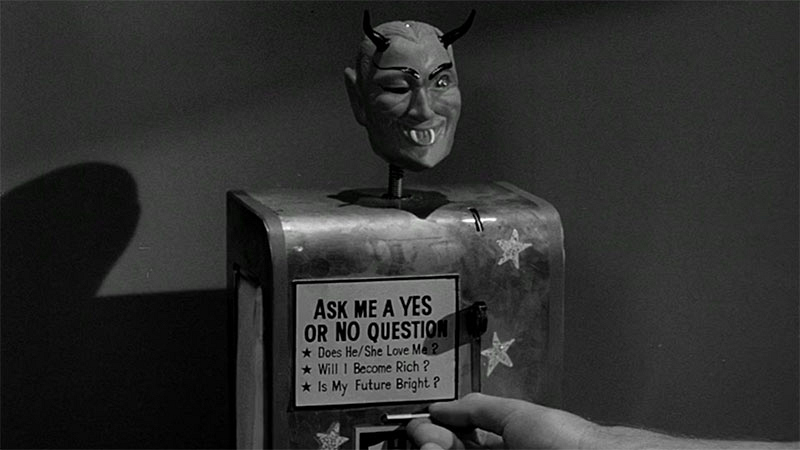 In "Replay," Nina learns a similar lesson from her journey into The Twilight Zone, when her video camera offers her the ability to rewind time. It begs the question: is knowing the future really the only way to avoid it?

STREAM: The Classic Episode Of The Original Twilight Zone, "Nick Of Time" 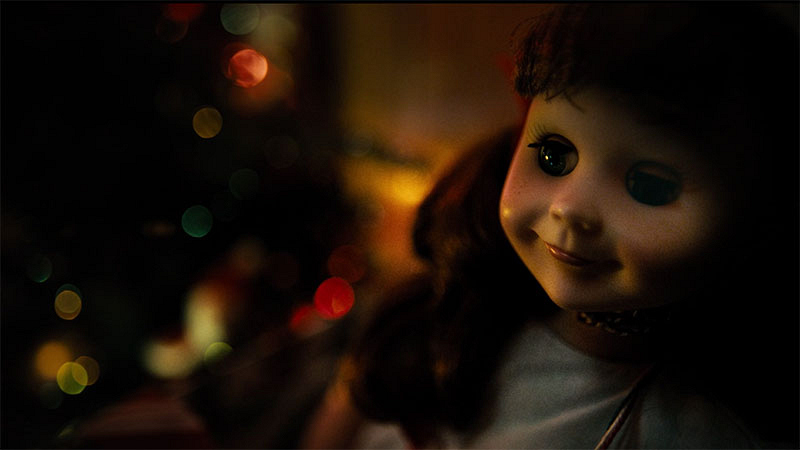 Talky Tina
As we've seen in episodes previous, the creators behind The Twilight Zone love showing reverence for the classic episodes that came before.

In "A Traveler," in which a mysterious stranger crashes a small Alaskan police department's Christmas festivities, it turns out the stranger isn't the only creepy entity lurking around the party.

During "A Traveler" there's a brief but up-close look at a replica of one of The Twilight Zone's most iconic figures: the murderous doll called Talky Tina. 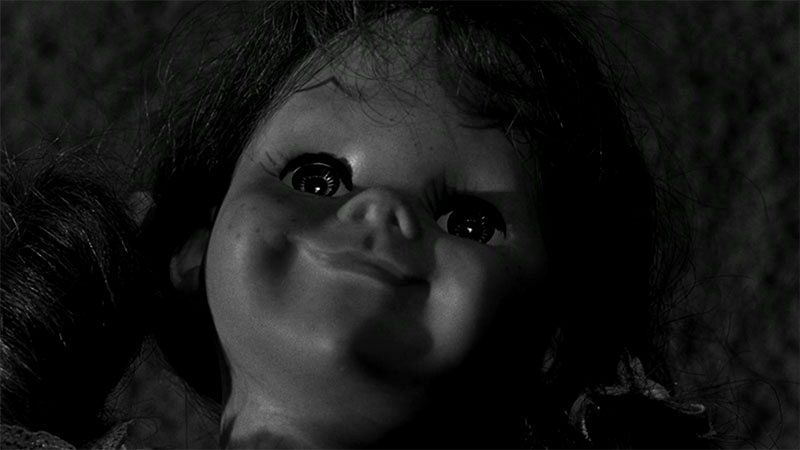 In 1963's "Living Doll" (Season 5, Episode 6), an unstable man enters into a deadly feud with his stepdaughter's new doll, who turns out to have more underneath the surface than meets the eye—not unlike the stranger in "A Traveler."

There are some other Easter eggs laced throughout the Christmas decorations, too, so keep your eyes peeled.

Kanamit
In "The Wunderkind," Raff Hanks (John Cho) finds himself running a presidential campaign for the most unlikely candidate the United States has ever seen: a kid, who's main platform seems to be free video games.

Early on in the episode, we find Raff in a bar with a colleague (Allison Tolman), who can be seen drinking a very particular brand of beverage: Kanamit Cream Ale. 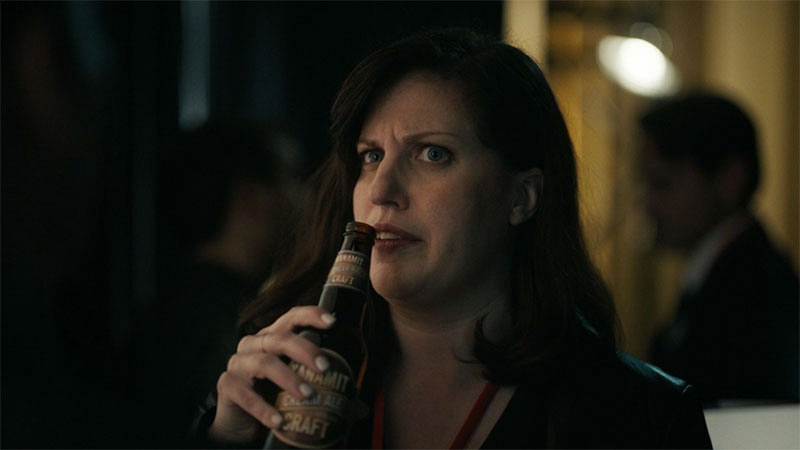 It's pretty inconspicuous, but longtime fans of The Twilight Zone will recognize this as a reference to the classic episode "To Serve Man" (Season 3, Episode 24), in which an alien race called the Kanamits make their way to Earth.

Upon arrival, the United Nations are convinced the aliens are peaceful after the strange visitors help put an end to some of the planet's impossible-to-solve problems. 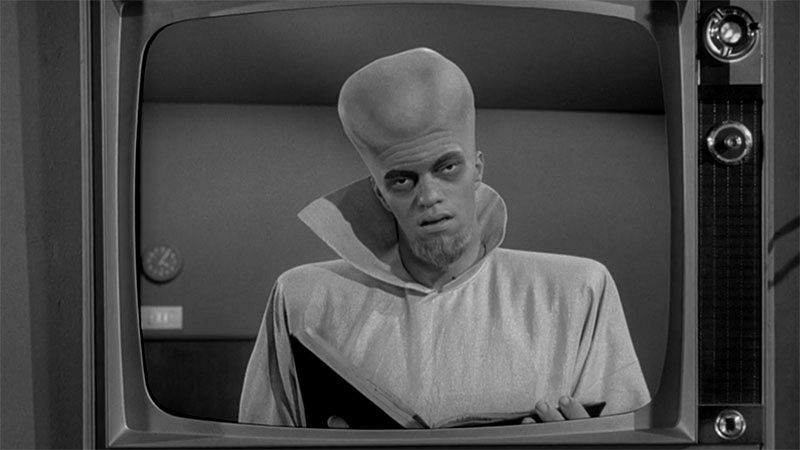 Naturally, in The Twilight Zone, nothing is as is seems, and we soon learn the Kanamits have something sinister in store for Earthlings.

While "The Wunderkind" remains Earthbound, the parallels of people putting trust in someone with selfish intentions are universal.

STREAM: The Classic Episode Of The Twilight Zone, "To Serve Man"

The Bradbury
In "Six Degrees of Freedom," the first manned mission to Mars goes terribly awry when the crew is stranded in space after an apparent nuclear apocalypse. The name of the shuttle housing the last humans in existence? The Bradbury. 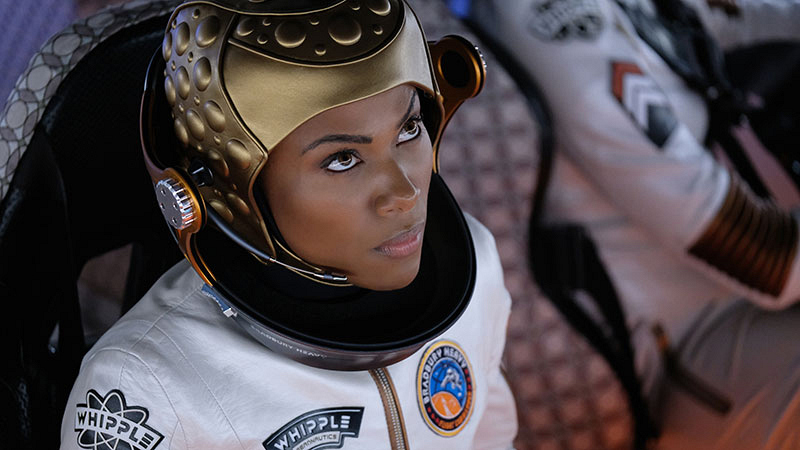 This is, of course, a reference to famed science-fiction author Ray Bradbury, who—in addition to some of the most influential sci-fi stories ever written—penned a classic episode of The Twilight Zone called "I Sing the Body Electric" (Season 3, Episode 35).

STREAM: The Classic Episode Of The Twilight Zone, "I Sing The Body Electric" 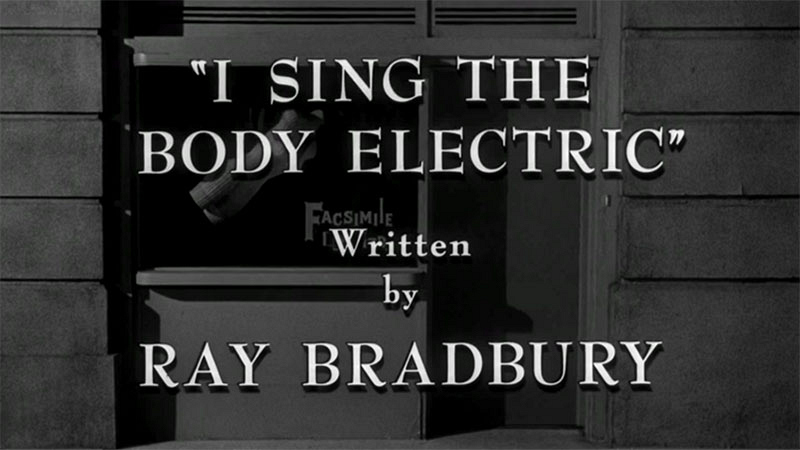 While "I Sing the Body Electric" doesn't involve space travel, it does deal with artificial intelligence and the influence of technology on our society and psyche, much like "Six Degrees of Freedom."

Maple Street
In "Not All Men," the men of a quiet town are sent into a rage spiral of toxic masculinity when meteorites rain down and unleash something sinister that has been bubbling underneath the surface all along.

When Annie (Taissa Farmiga) and Martha (Rhea Seehorn) are trying to make their way to safety as the town collapses around them, they spend a brief reprieve hiding out behind a gas pump. 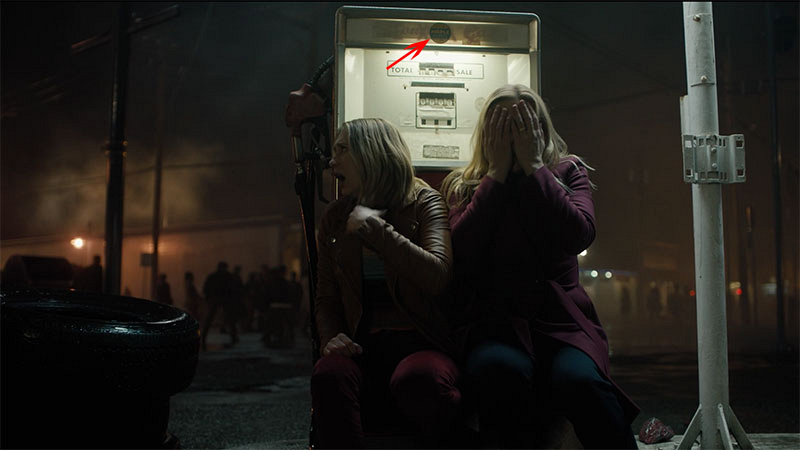 Astute viewers might catch the branding on the face of the pump, Maple Street Oil & Gas, and recognize it as an obvious call back to a classic episode of The Twilight Zone called "The Monsters Are Due on Maple Street" (Season 1, Episode 22).

In this revered episode, a small town—much like Annie's—tears itself apart through paranoia when they believe aliens to be living among them, and the once-quiet neighborhood devolves into chaos and violence.

STREAM: The Classic Episode Of The Twilight Zone, "The Monsters Are Due On Maple Street" 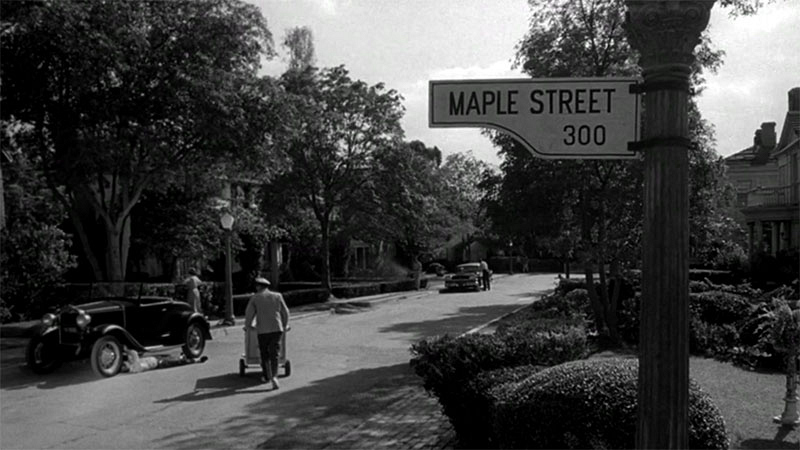 The procedure mask
In "Point of Origin," Eve (Ginnifer Goodwin) discovers that she's not from where she thought she was. When she's detained by the government, she is forced to undergo terrifying experiments.

While she's in the care of Mr. Allendale (James Frain), he uses a device to try and uncover her memories. The device that gets strapped to her face should look familiar to fans of The Twilight Zone. 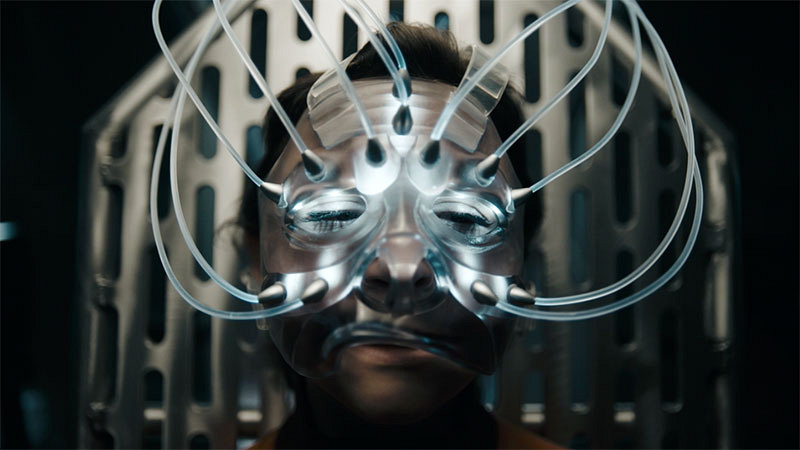 That's because it holds a striking resemblance to Doctor Bernardi and the other characters in the classic episode of The Twilight Zone called "Eye of the Beholder" (Season 2, Episode 6).

STREAM: The Classic Episode Of The Twilight Zone, "Eye Of The Beholder"

In it, a young woman undergoes an attempted procedure to make her "beautiful" in the eyes of her society. When her face is finally revealed, the viewer sees a woman with movie star looks (Donna Douglas), but the characters react in terror.

Because to them, "normal" is the pig-like features we see on their faces. 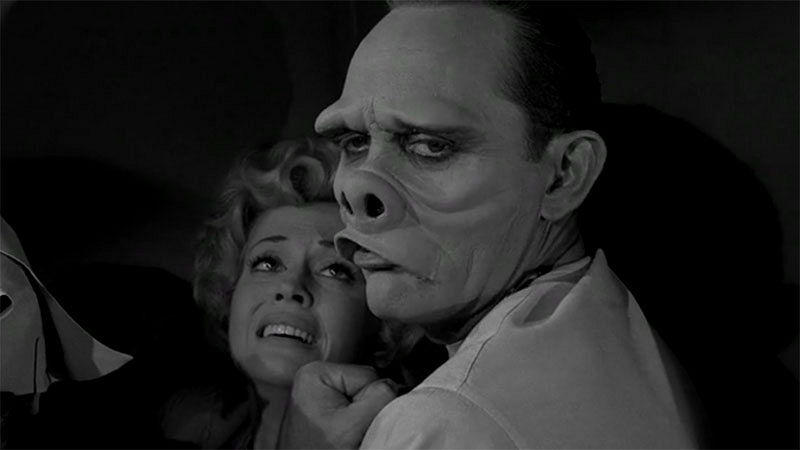 Whether it's being frightened of others because of where they're from or what they look like, The Twilight Zone has always been able to shine a revealing light into the darkest cracks of society.

"A Most Unusual Camera"
In "The Blue Scorpion," Jeff (Chris O'Dowd) becomes obsessed with a mysterious pistol that his father used to commit suicide.

After he learns of its mysterious origins and how it's desired by the gun collecting community—able to fetch a very high price, he's told—the gun begins to have an impact on Jeff's life. It's almost as though it has got a hypnotic power over him.

This isn't the first time we've seen an object take hold of a person in The Twilight Zone, and "The Blue Scorpion" offers a fun little Easter egg to remind us. 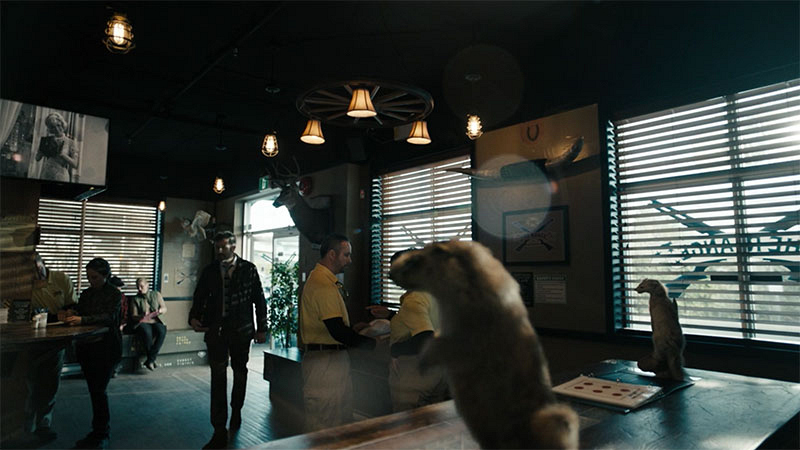 When Jeff walks into the gun range, on the TV in the lobby we can see a clip from the classic episode of The Twilight Zone, "A Most Unusual Camera" (Season 2, Episode 10).

Much like Jeff, the characters in "A Most Unusual Camera" become obsessed with an inanimate object—this time a camera—which they learn can tell them their future.

STREAM: The Classic Episode Of The Twilight Zone, "A Most Unusual Camera"

After using it to predict the winner of a horse race, the camera quickly becomes the source of conflict within the group. And, ultimately, the reason for their gruesome demise. 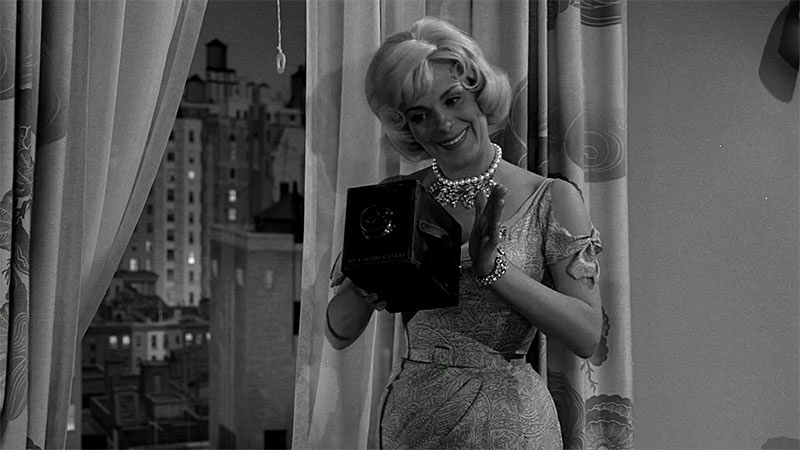 In both episodes, The Twilight Zone excels at showing the dangers of valuing objects more than human lives.

"Time Enough at Last"
In the fourth-wall-breaking season finale of The Twilight Zone, Sophie (Zazie Beetz) is a writer struggling with a rewrite for her episode of, well, The Twilight Zone. After production goes awry, she finds herself being stalked by a mysterious figure called the Blurryman.

Throughout the episode, we get hints at Sophie's fandom for original episodes of The Twilight Zone, but none are more overt than the references to the classic episode "Time Enough at Last" (Season 1, Episode 8). 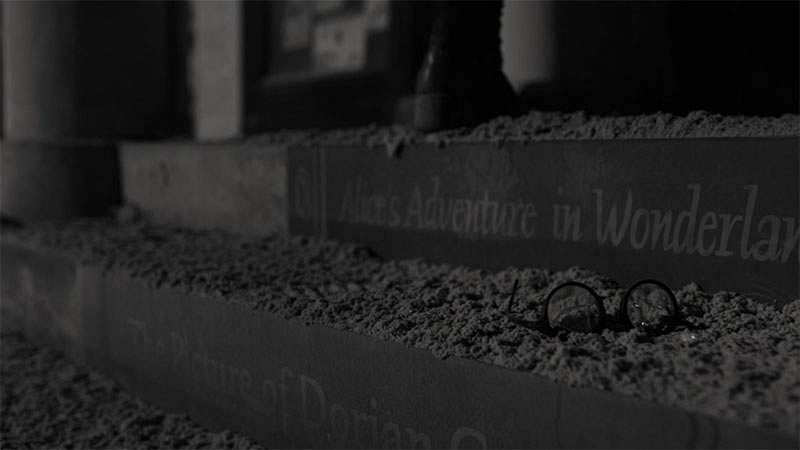 "Time Enough at Last" is the story of Henry Bemis (Burgess Meredith), a squirrelly bookworm who seems to have trouble relating to people and finds solace in the worlds of fiction.

When he's the sole survivor of a nuclear holocaust, he's elated to discover the ruins of a public library with more than enough books to keep him busy forever.

STREAM: The Classic Episode Of The Twilight Zone, "Time Enough At Last"

But in one of The Twilight Zone's most iconic twists, Henry stumbles and his glasses fall off, shattering on the library steps, leaving the world around him in a complete blur. 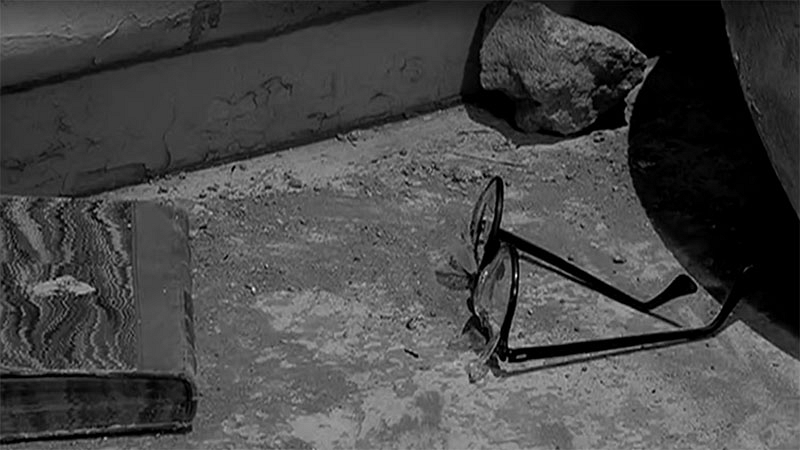 Not only do we see a clip of this classic episode within "Blurryman," but toward the end, as Sophie wanders through a wasteland of her own and climbs the steps of a decimated library, we see Henry's shattered glasses.

These Easter eggs are just the tip of the iceberg. What other callbacks have you, the eagle-eyed viewers, been able to find?

Stream The Twilight Zone, available exclusively on CBS All Access.

And now, stream every episode in black and white.