After the screening, which was attended by many of the show's cast members, Executive Producer and Director Craig Zobel sat down with the Pittsburgh Post-Gazette's Maria Scuillo for a Q&A, where the pair delved into topics including the real-life towns that influence the One Dollar's Western Pennsylvania setting, how a one-dollar bill will pass between characters like a game of tetherball, and why One Dollar isn't your average murder-mystery series.

READ: How And When To Watch One Dollar On CBS All Access

When discussing One Dollar's rust-belt setting of Braden, Pennsylvania, a fictional town outside of Pittsburgh, the EP/Director noted how the show works to capture the relationship between the town's haves, who work in tech and other newer professional fields, and the have-nots, who still work in the town's less-profitable steel mills.

"To see the meeting of the two [economic] sides of the way the steel industry left and now there's this new industry coming in with tech, you're really watching them side by side, and it's pretty interesting," he said. "In a way, it feels like a privilege to us, that we hopefully bring some kind of truth to, because I don't think people tell stories about places like this very often on TV." 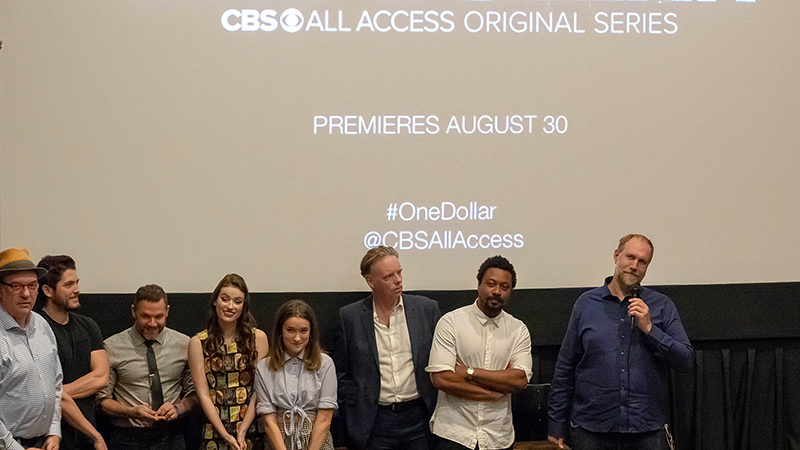 The EP/Director also noted that One Dollar is hardly your average murder-mystery series, comparing it to a game of tetherball.

"In my mind the show has this murder-mystery background, which you see a bit of in these first two episodes, and that continues," he said. "[But] I always described it as—if you remember the game tetherball—I feel like the murder mystery is the [tetherball] post, and then the dollar bill kind of spins around the town and you get to see, different, essentially little short stories while you're honing in on what the murder mystery narrative is, but get to get a sense of the town and the class struggle that's happening there."

Stream the series premiere of One Dollar on Thursday, Aug. 30, exclusively on CBS All Access. Then, every Thursday thereafter, a brand-new episode (there will be 10 episodes in total) will be made available on-demand, exclusively for CBS All Access subscribers.