Is Jane Lynch's Angel From Hell Character The Real Deal?

Learn more about this hilarious fall comedy from Executive Producer Tad Quill, Lynch, and more.
“Is she actually a guardian angel or is she nuts?” Tad Quill, Executive Producer of the new CBS comedy Angel From Hell, asked a packed house of journalists during the Television Critics Association panel on Monday.

Quill was describing the show’s main character, Amy, played by the incomparable Jane Lynch, who may—or may not—be assigned from above to watch over a plucky young doctor named Allison (Maggie Lawson).

Thing is, Amy isn’t your typical angel. She likes to drink, has an unusual taste for taquitos, and might appear to be more homeless than heavenly.

That begs the question of whether this sassy broad is a total fruitcake or actual angel. 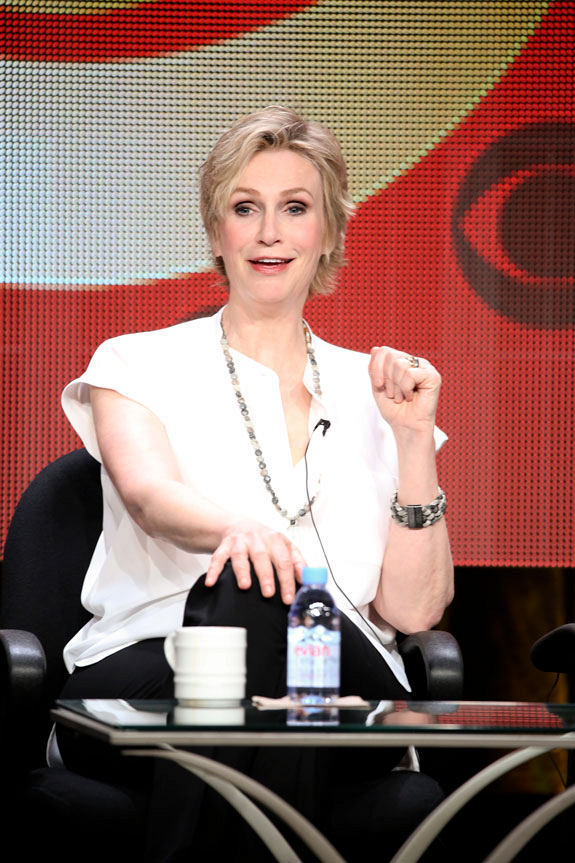 “There will be evidence for both and it will be up to the audience to decide,” Quill said.

Alongside the famed producer (whose past credits include Spin City, Scrubs, Samantha Who?) sat series stars Lynch, Lawson, Kevin Pollak and Kyle Bornheimer, who all fielded questions about the multi-camera comedy.

When asked what originally drew Lynch to the role, she said she fell in love with Amy’s carpe diem attitude; however, in the script’s first draft, the character was written for a younger actress. But after Lynch’s agents inquired about having her lead the project, the producers rewrote the script to accommodate the acclaimed actress.

This actually isn’t the first time Lawson and Lynch have worked together, but the women were thrilled to reunite.

“I was excited to see Jane again because we’d done [another show] together,” Lawson said. “Then, at the first reading for Angel From Hell, I went to the women’s restroom and found Jane there, singing at the top of her lungs.”

Lynch was belting out a show tune, which she’s wont to do.

“I always sing in the bathroom,” Lynch proudly admitted. “The acoustics are awesome.”

Will Quill allow Lynch to express her musical side on television?

Guess you’ll have to watch and see!